Oh how I love these posts.... joined 10 minutes ago, and then asked your big question. Except not really, gave zero description of the problem, just "doesnt work how i thought"
With that amount of description the solution is to return it.

If theres more to the story than the 8 words you posted, please do tell, might actually get some help.
R

Well. My second battery is dead. I have everything wired to primary battery. The second battery I just wanted to use for start rig if primary Went dead. the switch has 3 settings. The red light on switch doesn’t light. There green and red. Off.

Are you using this, and did you follow the installation instructions 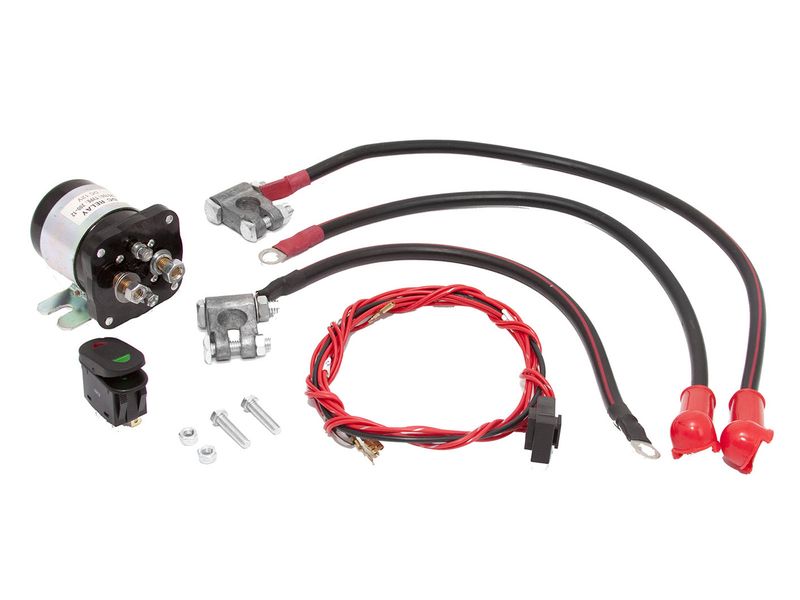 Get the Dual Battery Relay from Rugged Ridge fast with free shipping in the lower 48 United States. Our team of product experts, extensive image galleries, and legendary customer service make it easy to get the right part the first time.

Three possibilities: (1) your relay is bad; (2) your switch is bad; (3) you wired something incorrectly.

I’d also check the batteries. Are they both the same size, age, kind, etc,?
R

Will do thanks. I have another switch. I’ll look at all wiring first and switch the switch out. I’ll keep you up to date. Thank again
R

Will do. I have a brand new red top was thinking of getting a yellow top for the second one.

redrockcrawler said:
Will do. I have a brand new red top was thinking of getting a yellow top for the second one.
Click to expand...

If you’re talking about optima save your money put it elsewhere.

since one of your switch positions isn’t lighting that’s the side of the circuit that needs testing. The solenoid and switch wiring, we don’t have a wire map / installation instructions to tell you exactly what to test.
R

I’ll re trace all the wires. Hopefully it that simple. Thanks for info.

Optima’s have really gone down hill, have the batteries checked first. I’ve been run twin Odyssey batteries in Genesis trays in my Jeeps and have had 0 issues. Ideally you want to have all your OEM wiring to tie into your primary battery, then have you accessories on the secondary to minimize risk of killing your primary starter battery. I agree on chasing the wiring first, then get a volt meter out to see if you are getting power on both sides of the relay one the primary is charged.

I ran a dual battery system for a while back before LED lighting was what it is now. Only damn thing those dual batteries were good for is killing batteries two at a time and becoming a fire hazard. I went through 8 yellow top optimas real quick and pulled that crap out. Haven't missed it since, and my batteries now last years instead of months. With most of these inexpensive solenoid-activated systems, when one battery goes bad, the next one won't be far behind, and you won't know until its too late.

Sorry I could be of much help, but in my opinion you'd be better off boxing it up and sending it back. Rugged Ridge makes a good amount of money selling cheap, knock-off versions of popular mods. Some are decent, this one is not. It's nothing you can't go buy at the local Napa for even less, they just supply all the wiring to make it convenient, and tack on some profit.
You must log in or register to reply here.
Share:
Facebook Twitter Reddit Pinterest Tumblr WhatsApp Email Share Link
Top Bottom