Our new to us WK2 had an issue where the 40% split wouldn’t fold down or recline due to the ham fisted abilities of someone in it’s past.

Someone along the way had wrenched so hard on the tilt handle that they’d broken off the plastic sprocket on the mechanism.

After some digging I was able to verify that a replacement cable would come with this part attached to it so ordered one a week or so ago. I was able to pick it up today and decided to tackle it while I was thinking of it.

Overall it wasn’t as bad as I thought, unbolt the seat base, front bolts only so the base would flip up and allow access under the seat. Climb into the trunk and pull the flap of carpet behind the seat back so I could see where the cable terminated and hooked into the latch mechanis, pull the cable with some needle nose pliers so the seat folds flat. Unhook the cable, hook the new one in and route it under the seat (go over the bar/tube part of the frame rather than underneath it - the cable would be too short otherwise). Under the seat cushion, cut the zip ties (3) holding the old cable to the seat springs, drill out the two rivets holding the lever mechanism in place and then route the new cable the same as the old one and rivet the mechanism in place. Seat bolts torque to 37ft/lb.

Cable: $80 CAD
An hour of labour: Free
Having the back seat be fully functional again: Maybe not priceless but definitely handy. 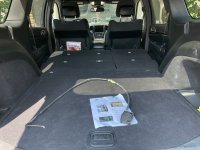 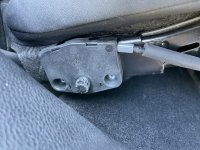